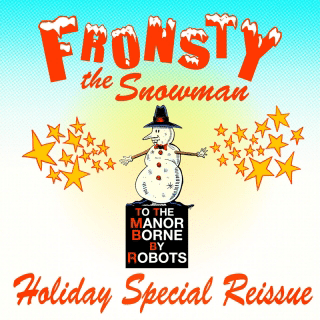 Fronsty The Snowman is re-issued here as a stand-alone piece, minus the story-within-a-story framework of To The Manor Borne By Robots. Fronsty is a fun, silly Christmas tale for kids and adults alike (unlike the rest of To The Manor Borne By Robots, which is NSFW). Leading the fray as Fronsty is superstar voice actor Robbie Rist, who began his long career as Cousin Oliver on The Brady Bunch. Aiding and abetting is Feodor Chin, the voice of Zenyatta in the hit game Overwatch, as Fronsty’s elf bestie, Jojo. Narrating this Yuletide yarn is Judas Priest frontman, the Metal God himself, Rob Halford. Merry Christmas from the Manor!!